Chatsworth House from the sky! ©thegazeofaparisienne

At the Chatsworth House, the 12th edition of Sotheby’s “Beyond Limits” made its appearance on the grounds of the stately home. This year, the monumental sculptures of several great post-war American artists are paid tribute.

At first glance, the location is simply striking. The majestic home transcends the centuries, from the 1550s until the present, without seeming to bear any stigma. A walk through Chatsworth is an artistic journey in one of the most beautiful mansions in England, situated in the heart of Derbyshire (about 3 hours from London). While the house boasts stunning architecture and landscaping, there is also a very rich artistic heritage spanning over 4,000 years of history, brought to life by first-class events held onsite.

16 Generations of the Illustrious Cavendish Family

Chatsworth and its park tell the story of the illustrious Cavendish family and the Dukes of Devonshire, a story littered with several brilliant personages. The beautiful Georgina Spencer, ancestor of Lady Di, and wife of the 5th Duke,was portrayed by Keira Knightley in the film « The Duchess” which was shot on the grounds of Chatsworth. Frequent guests at Chatsworth included King William II and his wife Mary; and later King Edward VII and Queen Alexandra. In 1897, a sumptuous costume ball was given in honour of Queen Victoria’s Diamond Jubilee. 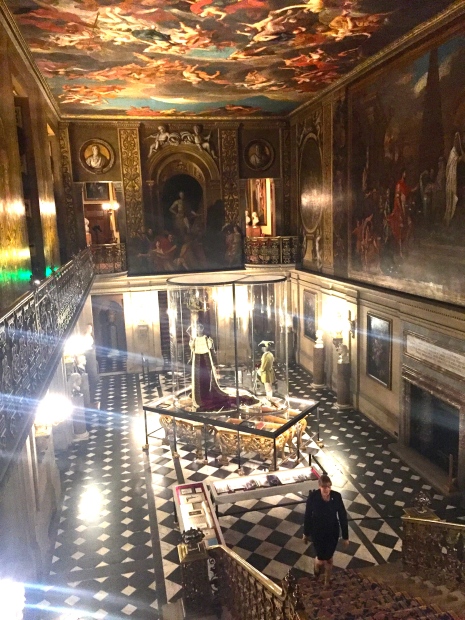 Sixteen Cavendish generations have walked through Chatsworth House’s lavish rooms, leaving the trace of their own lifestyle. What makes Chatsworth so special is this evolutionary cohabitation of each generation’s taste. Successive renovations such as ambitious additions to the main building, and the creation of Lancelot Capability Brown’s romantic gardens (18th century) showcase the history. All of this is done with exquisite taste, creating a slightly eccentric fantasy that characterises the unique charm of the English.

Today, it’s up to the 12th Duke of Devonshire and his wife to take care of the preservation and development of Chatsworth House. Huge restoration efforts continue to this day. The Duke and Duchess are both great lovers of Contemporary Art, much like their predecessors were during their time. Throughout Chatsworth, contemporary works of art bump elbows with great masterpieces.
In celebrating and respecting the family’s love of art, The Duke and Duchess open Chatsworth’s doors to offer first-class Art Events such “Beyond Limits”, Sotheby’s annual show of  exceptional Modern and Contemporary sculptures to admire and to buy.

Robert Indiana .1990, One through Zero, ©thegazeofaparisienne

Being incredibly English with its luxurious verdure, naturally romantic style, flocks of white sheep grazing peacefully, Chatsworth Park never ceases to charm me. Among the many surprises found on the grounds are magnificent fountains, breathtaking stone gardens, and immense trees. At this time of year, spectators can also enjoy and marvel at the outstanding Contemporary sculptures of “Beyond Limits”.

In a special preview showcase, under a radiant late-Summer sun, I got to experience this beautiful 12th edition of “Beyond Limits”. Dedicated to American artists of the post-war years, the installation was completed by night. The walk begins with a piece by Robert Indiana: “One Through Zero (1990).” In this work, giant numbers randomly arranged on the lawn give one the impression of entering into the world of Alice in Wonderland. 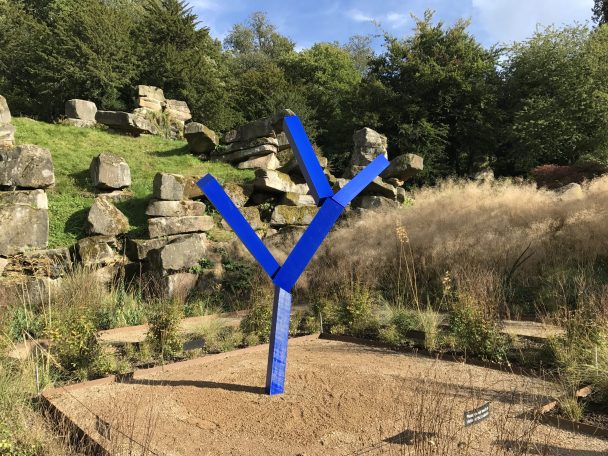 Next, there’s the fascinating black steel sculpture by Tony Smith, “Source,” that struck me with its imposing presence, and fascinating angular variety…perceived only when one walks around it. My favourite work was perhaps a mobile by Georges Rickey, “Column of Four Squares Eccentric Gyratory III,” which reflects the purity of light while moving with the rhythm of the wind. Magic!

Farther along, I observe a white pyramid by Sol Le Witt and a colored sculpture by Joel Shapiro. The shape of its fixed components gives the impression of potential movement, and its vibrant blue hue stands out on the landscape. The exhibition also displays three works by Julian Schnabel and one by Richard Serra called « Lock ». Its low height makes this piece a rarity in Serra’s work .

Richard Serra, Lock, @thegazeofaparisienne
In total, there are 22 masterpieces to explore and appreciate. Sotheby’s “Beyond Limits” is open to the public from 15 September through 12 November. A must-see !