Film: “The Fabulous Destiny of Elisabeth Vigée Lebrun, Painter of Marie-Antoinette” on ARTE, Saturday, October 3 at 8:50 p.m. and Sunday, October 4 at 3:35 p.m. 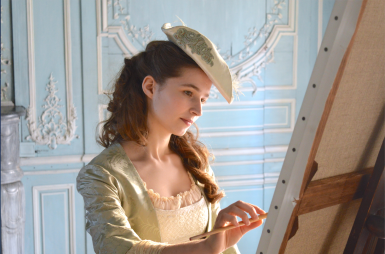 Paris dons its finest clothes and celebrates a veritable queen, the portraitist Elisabeth Vigée Lebrun.  Elisabeth lived a charmed life among society’s elite, rising through the ranks of an impressive array of painters, writers, singers, and actors. Upon meeting Talma, she was so struck by his person, the sheer power of his fame, that she couldn’t utter a word. As a child, she loved listening to the artist friends of her father Louis Vigée. They would gather at night with her father, her marvelous father, a pastellist who disappeared from her life too soon to teach her the art of painting and portraiture. 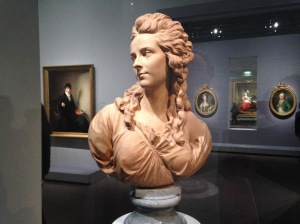 All the same, Elisabeth’s portraiture would grow into the greatest passion and accomplishment of her life. Indeed, her technical mastery of portraiture would eventually match that of her male peers. She would be one of the only women accepted into l’Académie Royale. Her only feminine company in l’Académie was Labille Guiard: Elisabeth’s flamboyant, straw hat-flaunting competitor whose portrait « l’artiste dans son atelier avec ses deux élèves » is now on display at the Grand Palais (on exchange from New York for a portrait of Marie-Antoinette).

Marie-Antoinette pulled strings so that Louis XVI would grant Elisabeth admission into l’Académie Royale. She would be admitted on behalf of a royal command, and amusingly, without a specialization,. Indeed, the academics who admitted Elisabeth into l’Académie Royale acted « with a profound respect for their king’s orders. » Within l’Academie, she tried her hand at historical painting with “La paix ramenant l’Abondance.” Note that at this time, it was unheard of for women to paint male models! 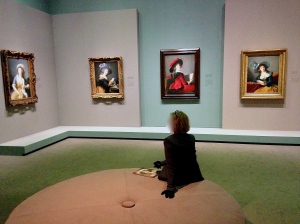 Elisabeth and her husband were ever the stylish couple, and led private lives unhindered by expectations of marital obligation.  With a comprehensive understanding of marketing, Elisabeth benefited immensely from her royal model Marie-Antoinette. Indeed, she would often present the Queen’s portrait to future clients.

In their sumptuous home, the pioneering couple maintained their very own salon where Lebrun would receive visitors and exhibit Elisabeth’s paintings.

The talented Elisabeth developed a consistent style of portraiture that, notwithstanding its tendency towards idealized depiction through the alleviation of certain defects, achieved a splendid degree of realism. She would begin working faster and faster, to the point where she could complete a portrait in a session of only two to three hours. Keeping in mind that Elisabeth liked to paint only young and beautiful subjects, the portrait of Madame de Staêl (“Corinne au Cap Misène”) concludes the exhibit with an intriguing dissonance. Elisabeth must have appreciated Corinne for her great intelligence, but unfortunately, Corinne possessed an unattractive physique. Elisabeth put in an incredible amount of time into the portrait, but might not have finished it without the insistence of her impatient model to see the result!

On a fast track to stardom, Elisabeth’s prices soared to the extent that even the paintings of her famous friend David were selling for less than hers. This success began early, and Elisabeth didn’t think about marrying because, seeing as she was earning plenty of money on her own, she felt no such need for the social commitment. Without the insistence of her money-minded mother, Elisabeth would not have agreed to marry Monsieur Lebrun. Despite her initial resistance, their marriage was quite successful. The couple complimented each other well, their business thrived, and they had a little girl named Jeanne Brunette whom Elisabeth loved unconditionally. During the Revolution, Elisabeth and Jeanne escaped together to Italy. 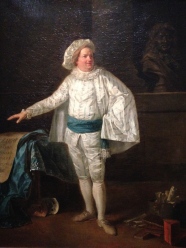 Each one of Elisabeth’s immediate family members led very independent lives. The one drawback: Lebrun was an extravagant spender, of which Elisabeth complains in her memoires. During her exile in Russia, Lebrun would even send her paintings that she would sell on his behalf.

Everything seemed to be going well: a perfect life, loyal friends (she would lose them to the Revolution), a loving family, her dear brother Étienne, her beloved daughter, and her magnificent dinner parties (each with the orgiastic spending and scandalous potential of a « souper grec »).

Elisabeth was not only beautiful, but a true innovator in fashion. She painted herself in lightweight, white cotton dresses–just like the gaulle dress worn by Marie-Antoinette that sparked a scandal upon its exhibition. Propriety was not a concern of hers. She lived her life as she wished: commissions, money, lovers, etc.  When a rumour arose detailing an escapade implicating her and the Contrôleur général des finances, Elisabeth responded :

“Monsieur de Calonne has always seemed unattractive to me because he wears a powdered wig. A wig! Considering my love of all things picturesque, I might have been keen on a wig! I’ve always been horrified by them, to the extent that I’ve refused a rich marriage, because the suitor was wearing a wig. » (Excerpt of “Mes souvenirs” by Elisabeth Vigée Lebrun)

But the Revolution would change everything. While her rival Adélaïde Labille-Guiard painted the new faces of the Revolution (Robespierre in deputy d’Arras à l’Assemblée constituante), she would exile herself for almost eleven years. Travelling first to Italy, Elisabeth would meet the internationally renowned Angélica Kauffmann (at the time, Elisabeth was only known in France).

Her long journey would end in Russia, where she crafted dazzling portraits of the Russian aristocracy. The portrait of Countess Golovin is especially exquisite. Note that the bottom is done in just one color–surely one of David’s influences which led Elisabeth to isolate the subject by removing the landscape. Also emphasized is the red color of the Countess’ shawl and, indeed, her overall sense of innocence. One can also admire Catherine Koutouzova, the wife of General Koutouzov, a distinguished intellectual who maintained a correspondence with Madame de Staël. In this work, his face is elongated and manipulated in a less uniform way while the woman’s character is highlighted as she remains on a solid gray background.

Elisabeth’s return to France was tinged with sadness, as this was not the France that she’d once loved. Her daughter, who did not marry well, ended up tragically in poverty. Elisabeth  turned to her nieces, teaching them her art.

She supported neither the Empire nor its new society of social climbers. Despite an attempt to paint a portrait of Caroline Murat that Elisabeth found unbearable, she regretted her life from before. Elisabeth’s melancholy would grow with her age, and as her beauty faded, she would no longer want place herself in her paintings. She would stay forever the painter of l’Ancien Regime. Regarding this era, Talleyrand once said: “He who has not lived the years around 1789 has not known the sweetness of life.” It was during these years that Elisabeth painted Marie-Antoinette. In her depiction of the queen’s dazzling figure, Elisabeth captured the elusive ideal of french elegance and, indeed, her very own « bonheur de vivre. »

I would like to thank the two curators of the exhibition: art historian Joseph Baillio and Director of the Graphic Arts Department at the Louvre Museum Xavier Salmon who allowed us to see this retrospective of new discoveries, certain works having never before been shown to the public.

We never grow tired of listening to Joseph Baillio, who for 40 years has held a passion for Elisabeth Vigée Lebrun. He knows nearly every detail of her life, which he shares with great enthusiasm in all of his anecdotes.

In the exhibition’s brilliant colors, he shows us the importance of restoring paintings. Moreover, I want to promote Baillio’s message that the portrait belonging to the Comédie Française of the actor Pierre Louis Dubus, otherwise known as Préville, needs a serious cleaning!