Color, even more than drawing, is a means of liberation. Henri Matisse.

A Matisse exhibition is always a hit! The Gianadda Foundation’s retrospective charts the artist’s creative development (1869-1954) throughout the first half of the 20th century, exploring his place at the helm of an impressive cadre of artist companions.  From Matisse to Picasso, Gris and Balthus to Bonnard, the chef d’oeuvres are endless!

Follow me into the dazzling world of Matisse and his contemporaries.

Everything begins in Gustave Moreau’s studio. With him, Matisse explains, he finds « un encouragement intelligent. »

Surprise! Matisse is refused from Paris’ prestigious school of Beaux Arts in 1892. However, Gustave Moreau accepts him into his course at his studio. There,   Matisse forms lasting bonds with other students, often painting alongside them. Moreau encourages his students to break rules, stray away from convention in an effort to find their unique artistic styles. It doesn’t take long for the teacher to notice Matisse’s talent and unique style in simplifying pictorial forms .

Seeing young Matisse’s work alongside that of his classmates, I find it especially remarkable that his color palette already possesses such a richness and sense of light.

In 1905, Matisse stands as a pioneer of Fauvism, the first great artistic movement of the 20th century. With his friends, including Derain, he challenges traditional painting with colors that are strong and pure, dissociated from the actual palette of the objects they depict. Diverging from his earlier orientation, Matisse’s work conjures direct imitations of reality in strikingly bold, expressive, and often whimsical ways. For Matisse and his contemporaries, this is a breakthrough. Liberation! « Les fauves sont lâchés! » 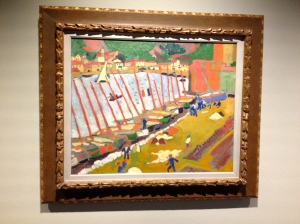 The Cubist influences appear in Matisse’s work between the years 1914 and 1917. Did you know that Matisse himself  invented the term “Cubism.” He used it to describe a painting at the 1908 Salon d’Automne by Georges Braque, “Maisons à l’Estaque” (1907). Not long after, the term was used by the art critic Vauxcelles and was later passed on throughout the Art world.

Inspired by Cézanne and close to Juan Gris (with whom he discusses cubism at great length,) Matisse nonetheless stays slightly detached from the movement and pursues his own artistic endeavors. The French windows seen in this piece, reduced to their essentials and depicted with graphic simplicity, are in fact a recurring image in his experimentation with Cubism.

Just alongside, I contemplate another marvel: a painting by Juan Gris, where colors and shapes explode in a marvelous still-life.

Over the course of the exposition,figurative interiors, portraits, and still lifes supersede gradually the cubist forms. This artistic orientation begins as soon as 1917 when Matisse moves to Nice (South France), enraptured by the area dazzling lights and brilliant sun. There, he creates relationships with of old great masters who retired in the South ,among which Renoir, Bonnard, and Maillol. Matisse applies the distinctive texture and flamboyance of his colors to more Classical figures. 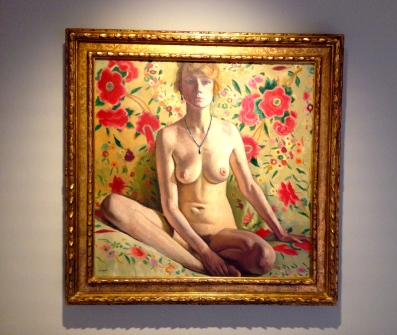 Exotic dreams and Odalisks. Following Delacroix, Matisse, inspired by his visits to Morocco, indulges himself  into the oriental dazzle and produces lavish masterpieces.The richness of the ornamentation and the warm colors that adorn his paintings manage to inspire none other than Picasso himself!

“When Matisse died, he left me an inheritance of his odalisks, and that’s my idea of the East even though I’ve never been there.” – Picasso.

Later in the exhibition, I was captivated by the vivacity and the force of explosive colors. During the postwar years, following Mondrian and Le Corbusier Modernist Art, the great Masters of figuration adopted more graphic styles, simplified shapes, and even clashing colors! 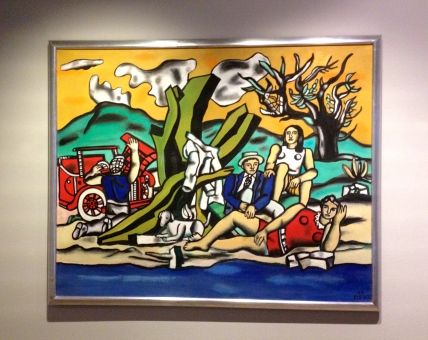 Cutting Colours. Matisse’s last great artistic step is without a doubt the high point regarding the expression of his immeasurable talent.

“Cutting into color reminds me of the sculptor’s direct carving.” Henri Matisse

Weakened by illness since his early 40s, he produces magnificent works by cutting and gluing tinted monochrome leaves in vivid gouaches. The act of cutting sculpts shapes in a way similar to line drawing, and the popping colors offer sharp contrast. Matisse creates the illustrated book « Jazz », inspired by strong memories of his life.

“These images with sharp and violent tones came from crystallizations of memories from the circus, from popular stories, from traveling.” Henri Matisse

Matisse last artistic epoch very much inspired the major abstract painters, such as Simon Hantai, or Viallat from the Support-Surfaces movement.

Matisse is truly one of the great figures of Modern Art. He found himself at the core of all major artistic reflections and revolutions during the first half of the 20th century. His creations evolved, experimented, and stretched his perspective, always displaying his brilliant style. Master of colors & shapes, he leaves us a dazzling work full of grace and  joy. 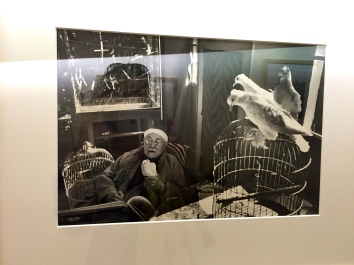 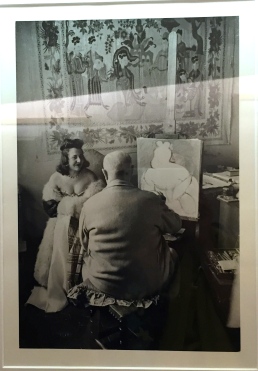 Not to be missed:  The exhibition displaying major painters pictures photographed by Henri Cartier Bresson, among which photos of his friend Matisse.