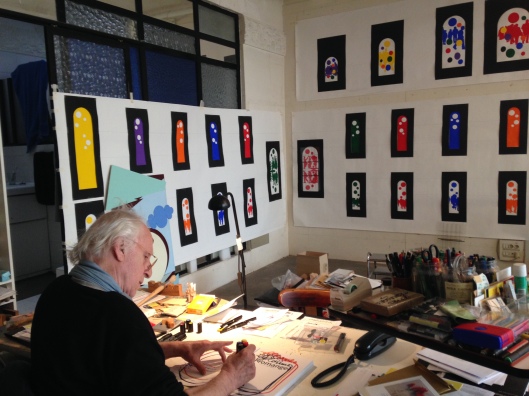 I was hoping to meet Gérard Fromanger, to clarify certain points and above all to become better acquainted with the artist of color, friend of poets, philosophers, and film directors…

…And surprise ! I heard him tell me, “Meet Saturday at 11 :00.” He agreed to see me, to share his enthusiasm with me, and it was with these combined feelings, both impressed and overjoyed, that I found myself knocking on the door to his studio.

As a matter of fact, over the course of the past few years I often found myself in front of Gérard Fromanger’s paintings at the retrospective at Landerneau, at Art Paris, or during meetings about narrative figuration, and in the past couple of days, at Pompidou which recently dedicated an exhibit to him.

The commissioner for the Pompidou exhibit, Michel Gauthier, took part in presenting the artist’s work according to themes: “Color Code,” “Red,” “History Painting,” “Portraits in Lines,” “The Painter and the Model”…so that the artist’s approach appears easily to the visitor. Such a careful selection of works allows us to access the artist’s process of creation! 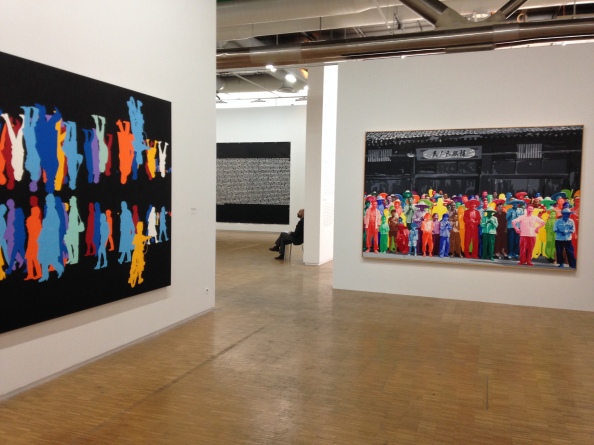 The idea of having a conversation with he who, at the age of 24, was presented by Jacques Prevert to the great gallery owner, Aimé Maeght, pleased me. Maeght had wanted Fromanger to become the new Giacometti! That had to have been exhilarating for the young man to be a part of this world, to live in Montparnasse…to be lent César’s studio, to meet Giacometti, to have fun in the evenings at Chez Castel with the Beatles.
And yet, Gerard Fromanger would end up choosing to say no to Maeght, setting aside his grey portraits, along with the ease of the life of an artist written in advance… 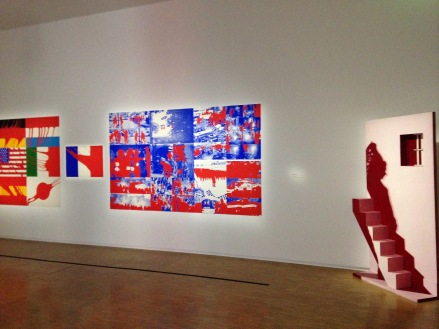 Furthermore, something which was unacceptable for the gallery owner, Fromanger definitively chose color and in 1965 his series of Gerard Philippe in The Prince of Homborg erupted, shaded in green and red…
This time, however, the intense red color settles on Susie’s pregnant silhouette which is climbing the stairs, in reference to Marcel Duchamp. The first shadow was born and painted in homage to a legend of Antiquity, recounting a fiancé’s departure to war where his lover, in seeing her fiancé’s shadow on the wall, asked him for one last moment and forever fixed his silhouette on the wall by painting it…the painting thus became “the daughter of love” (la fille de l’amour).
Red is also the color which bleeds, as is shown on this bloodied French flag which presently waves at us. It is this red that I again found in Fromanger’s own sort of “Guernica,” if you will, his painting of history. De toutes les couleurs, peinture d’Histoire, 1991-1992, represents an intense year of work, his life, his feelings, the cosmos, the present and future, all linked by the lines in his work. A new invention by the artist also appears: the network, “diverting rhizomes.” I was very touched when looking at this great fresco, not only was it done in 1991 the year of the Gulf War where everything came to a halt, but this painting was also premonitory, for the Twin Towers appeared in the painting to be touched by red lines, ten years before 9/11 happened.

It’s the artist’s entire complexity which appears to us through his paintings, murals of modern times. Well-known for having played a part in this narrative figuration movement, Gérard Fromanger recounts the present as he perceives it to be, with beautiful colors, characters who seem to be walking in modern times, communicating for us. 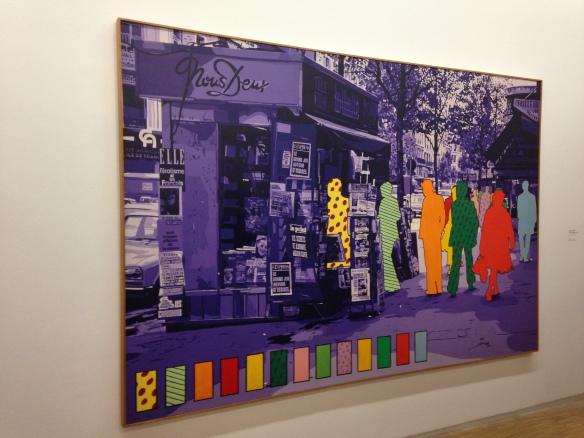 Fromanger’s color code in “Boulevard Sébastapol,” is written on the canvas, the artist having invented his own alphabet of colors. Confronting the news (current events that newspaper stands offer us) with passers-by (silhouettes who each take on a color and personalize each one of us) truly bearing information and current events erases the role of the kiosk. I quite liked the energy of this self-proclaimed artisan of color, and insisted on knowing the reasons for his choices: Why this green? Or that red?

Gérard Fromanger: “We are artisans, that takes place in the painting itself. It’s an extremely precise calculation that comes little by little and has nothing to do with the characters. It’s something else, it happens somewhere else. It happens through a clever combination and at the end, an emotional sort of color that doesn’t just happen in the street, but rather it’s the initial emotion that’s the subject.

In response to Gilles Deleuze, a good friend, who asked him “Why is there green right there?”

Fromanger says: “Because there is a little bit of red on the bottom and to the right, but it is inquisitive, and it’s too alone. It needs its complimentary color. It needs its man, or its woman, because it’s too alone, and it’s too hard to be alone; but after, once there are two of them, they can inquire about much more, etcetera etcetera, and eventually the two dance. There is no psychology behind the colors, what’s important is the painting.” 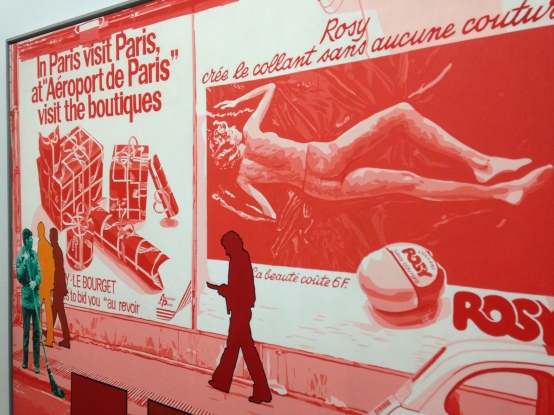 I couldn’t help but tell him about my conversation with a friend who is an architect, and who remembered his professor wanting to instill in him the importance of color according to the building blocks of Johannes Itten: “value clarity and saturation.” And guess who he was referring to? Fromanger!

As for my question, what value do you give to color?

Gérard Fromanger responded: « Personally, I’m more for cheerful passions, but the highest value for me comes from the World’s energy. So colors could be like Einstein’s example, you’re in a train station, your train is pulling out but there is another one next to it. So, how do we know whether it’s our train pulling out? By watching the platform. In doing this, we can well see that we’re actually the ones leaving the station, so there must be a platform. Therefore, between space and time, Einstein found the platform. He said, there is value in the platform, that is, it is constant, everywhere and always as speed and light. Einstein thus formulated E=MC2. For me, I also have to find my platform, and my platform is color, between human passions, decorations, figurations, geometry, lyricism, street art, different environments, videos, anything you like. But my platform is color!”

“I adore painting and I try to give it the chance of a lifetime to provoke a response. It’s a real challenge.” 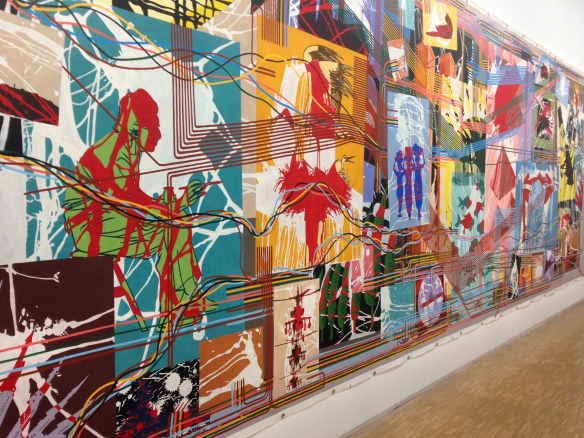 Fromanger’s private life always appears in his paintings, such is the case of his portraits in lines. The first is one of Anna in 1982, the wife he loves, followed by those of all of his friends Guattari, Duchamp, Picasso, Prévert, all very present in the exhibit. These portraits are a sacred invention, the faces become a subway map and it’s up to us to find ourselves in it and to see personality appear as if by magic! Fromanger continues to make them still today, but in accordance with his inspiration; in the exhibit we can even see an auto portrait from 2011. He also showed me a portrait of Giacometti, which was hidden in a corner of his studio… 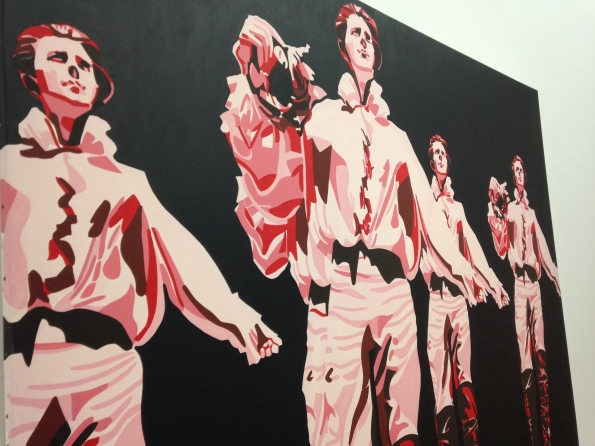 « What is a line? Are there lines in nature? No, there are no lines in nature, except for maybe the horizon…Thus, lines are an abstract creation, an intelligence perceived by the painter. I create this line which leaves, for example, from the top left of the canvas, beginning with light colors and finishing with darker colors. (…) The subway map is the face, my line, it comes out of nowhere only to return into nothingness. Meanwhile, the line goes down into the subway, the subway is Anna’s face which breaks free from the lines’ interweaving that cross over her face by deriving light and shadows according to the lines.”  Interview with Gérard Fromanger – La Grande Table France Culture

We were talking about his good friend, Eduardo Arroyo, who’s inspired by Balzac’s La Comédie Humaine, and I wondered if Fromanger would not also be indifferent towards it, and wondered about his thoughts on the subject.

Gérard Fromanger : “If I’m a painter, it’s because of what can happen by painting, personally I’m between Balzac and Dante, the Comédie Humaine and the Divine Comedy. I’ll take the both of them. I don’t focus on the psychology of characters; that’s apparent in the Comédie Humaine. Yet there is also the Divine Comedy, and I think that within that there are men who invented gods and not the contrary, but the metaphysic of this, the mystique, and the sacredness are what are truly interesting. Whether it be in the East or the West, this desire for knowledge constitutes who we are, to confront or to blend into mystery, into the enigma of our existence. I could say enigma just as well as comedy…” 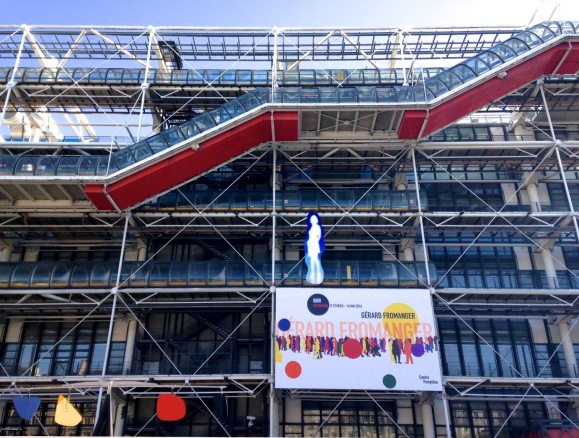 Curious, I looked at the hanging, and accessible works, the paintings stacked on the ground, the purple of Bayeux, a bullfighting poster, and some very beautiful nude drawings…
Hanging on the wall is his stained-glass project which he holds close to his heart—I see a spiritual image of the human community gathered together, and I hope that these glass works will one day be installed…and only one shadow on the painting!
But it’s time for me to stop the revolution that was started in a police van in 1968 with Jean-Luc Goddard, Pierre Clémenti, and especially this painter of color—this makes me think of the image of the front of Beaubourg, illuminated by Fomanger’s stars, an image the Calder mobile also seems to want to attain. I like seeing these two artists reunited by this common energy, by art. 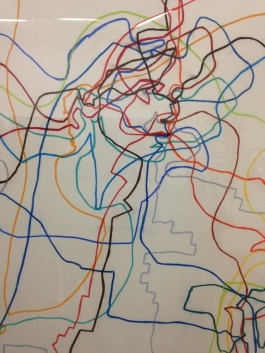 “When it was proclaimed in May of ‘68 that “we are energy,” I found in that phrase a force to paint the world’s energy. When philosophers (Sartre, Deleuze, Foucault, Guattari or Lyotard) or poets (Jouffroy, Bulteau or Bailly) would speak to me of this “énergie du monde,” they made me want to speak to them through paintings, and so friendship was spurred through this exchange of languages.”

« Fromanger is an artist who completely rejects the dichotomy which settled on the French artistic scene at the exact moment when he arrived on scene during the 1960s and ‘70s. With a committed art on the one hand which must assume that, at its base, it has little to do with painting, and on the other hand the formalism which assumes that above all one must preserve painting from all contact with the street, from all contact with society and with reality, right there, that’s the dichotomy that Fromanger seems to reject, reconnecting it with the modernist work he’s doing. At the beginning, Manet had some pure moments of painting, but at the same time he was also facing the industrialization of the banks of the Seine, the industrialization of entertainment. It’s this original dualism of modernism that Fromanger hopes to rediscover in his own painting…”

« There is a twofold focus in Fromanger’s art, who is both a political painter, concerned about contact with reality and with the periods of social upheaval, but also a painter who produces works that are continually, and always, self-aware. Perhaps the most active marker of this awareness in the paintings is color.” Michel Gauthier—Exhibit Commissioner 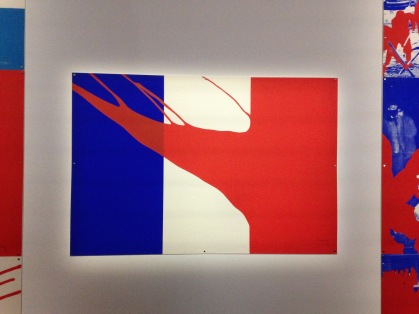