This year’s installation in the Metropolitan Museum of Art’s Anna Wintour Costume Center is titled Manus x Machina: Fashion in an Age of Technology. The exhibition follows last year’s revered China: Through the Looking Glass, which focused on Chinese culture’s influence on fashion design, and of course 2011’s Savage Beauty, which highlighted the work of Alexander McQueen. Manus x Machina focuses on the combined usage of the hand and the machine in creating contemporary haute couture and prêt-à-porter fashion. Traditionally, garments were either hand-made or machine-made, and the two types of production were mutually exclusive. Hand-made creations often signified luxury and haute couture, while machine-made clothes, on the other hand, made up the less expensive prêt-à-porter tier of the fashion industry. Manus x Machina presents the ways in which the hand and the machine now work together and how the techniques can compliment each other in one single garment. The stunning centerpiece of the exhibition is a wedding gown by Chanel with a long gold-beaded train (autumn/winter 2012-2015). While the dress is machine-sewn, it is also embroidered by hand and features gold hand-embroidered buttons by Maison Desrues. 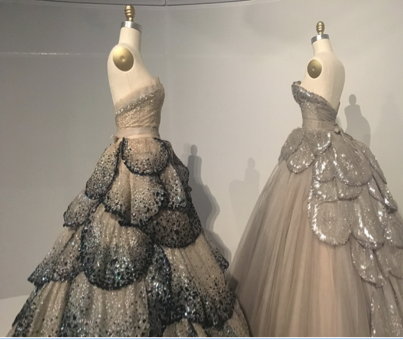 The exhibition uses Denis Diderot and Jean le Rond d’Alembert’s Encyclopédie ou Dictionnaire raisonné des sciences, des arts et des métiers (1751-1752) as a jumping off point and features a copy of the book itself. The Encyclopédie defines certain skills and elements present in the making of haute couture pieces, such as the concepts of embroidering, featherwork, the use of artificial flowers, pleating, lacework, and leatherwork. Manus x Machina devotes a section of the exhibition to each of these six categories. 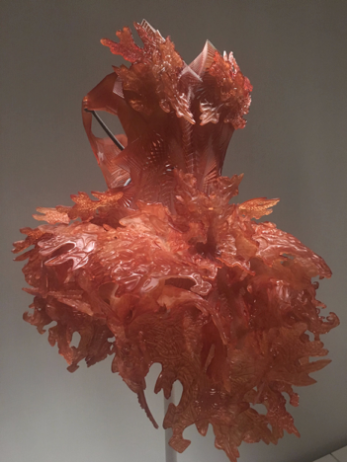 The cutting and grouping of petals for artificial flowers can be created both by hand or by machine. A Dior gown (autumn/winter 2012-2013), two prêt-à-porter Prada dresses (autumn/winter 2015-2016), and a Louis Vuitton dress (spring/summer 2012) are grouped together to demonstrate the diverse ways in which artificial flowers are used. The Dior dress, which is the only haute couture piece in this grouping, features all-over beading, while the two Prada dresses, one in pastel pink and the other in a pale blue, each have two large bows and intermittent bead and brooch details. The Louis Vuitton dress is covered in large, plastic flowers, and is embroidered by hand. The section features a quotation from Raf Simons, Dior’s creative director between 2012 and 2015, which reads: “the whole idea about juxtaposing something so specifically from that time with something so specifically from this time is, for me, already modernity in itself.” This sentiment, which is brought to life in his Dior gown that is both hand-embroidered and machine-sewn, exemplifies the exhibition itself. 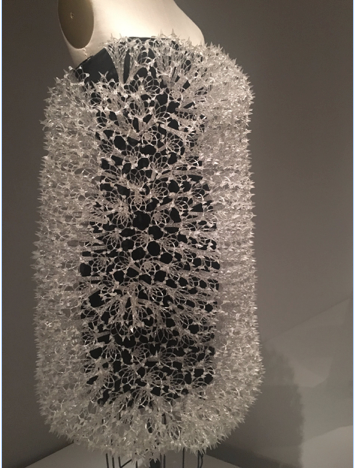 The leatherwork section emphasizes how PVC (polyvinyl chloride), which began to provide designers with a synthetic option for leather in the 1920s, changed the way in which the material could be used. The lacework section focuses on the evolution of lace, from a handmade to now mostly machine-made medium. The pleating section showcases haute couture Dior garments from 2015 that are pleated by hand, alongside a machine-pleated red dress by Mary McFadden in 1980.

The pieces featured in Manus x Machina showcase a diverse range of materials. A gold fiberglass dress (Hussein Chalayan’s “Kaikoku” Floating Dress), Gareth Pugh’s dresses made from drinking straws, and Sarah Burton’s gown for Alexander McQueen made from coral, freshwater pearls, and shells are all particularly noteworthy. They are displayed amongst pieces made from the more traditional cotton, sequins, polyester, and silk. Furthermore, much of the exhibition focuses on the employment of 3-D-printing in fashion. For instance, four seemingly traditional Chanel skirt suits are displayed together, the first of which originates from 1963-1968 and was designed by Gabrielle “Coco” Chanel herself. The three suits next to it, all designed by Karl Lagerfeld and presented in 2015-2016, mimic the traditional suit and are created using 3-D printing techniques. Lagerfeld’s statement is displayed: “[the suit] is 3-D printed to look like quilting, but the braiding and underlayer, which is visible through the quilting, were hand embroidered with gold paillettes…by Lesage. It’s the perfect marriage of the hand and the machine…it’s the mix that is interesting. Just using one or the other is very dull. Fashion is about today. What keeps haute couture alive is to move with the times. If it stays in an ivory tower, like Sleeping Beauty in the woods, you can forget it.” Manus x Machina demonstrates just that: modernity in the fashion industry is the harmonious incorporation of the new with the old.

Located in New York’s Nolita district, « The French Cheese Board » is a concept store that aims to educate and inform the public about the fascinating world of French cheese. In addition to being a retail space, the boutique also serves as an event space and art gallery where guests can merge their appreciation for both food and art in a truly interdisciplinary way…

The French Cheese Board
with Erica De Michiel