It was with much impatience that I awaited the monographic exhibit of Alexei Jawlensky at the Neue Galerie of New York.

In March of 2012, I happened upon this emblematic figure of Der Blaue Reiter during the exhibit called EXPRESSIONISMUS & EXPRESSIONISMI, housed at what was once the Pinacothèque de Paris Museum. My passion for privately-owned museums, such as the Neue Galerie founded by Ronald S. Lauder and committed to German and Austrian art, reaffirmed my enthusiasm and excitement for this new exhibit. It is always interesting to see how the owners choose to approach their exhibits. 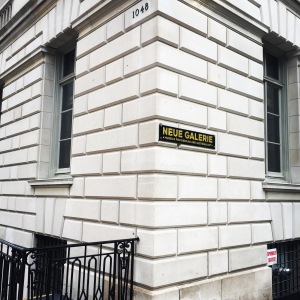 Previously, the only visible portraits had been those done by Gustav Klimt depicting Adele Bloch-Bauer: Portrait of Adele Bloch-Bauer I 1907 & Portrait of Adele Bloch-Bauer II 1912. These portraits are captivating due to their out-of-the-ordinary realization, but also because of each of their respective stories. Being also vessels of a tumultuous and delicate series of events, these portraits tend to bewitch the viewer, transporting them to the time when a woman in the beginning of the 20th century (a woman from the golden age, as Klimt saw it) who would never again represent the same person twice. Even the location, an enchanting house on 5th Avenue right in the middle of the Miles Museum, is a voyage to another time… 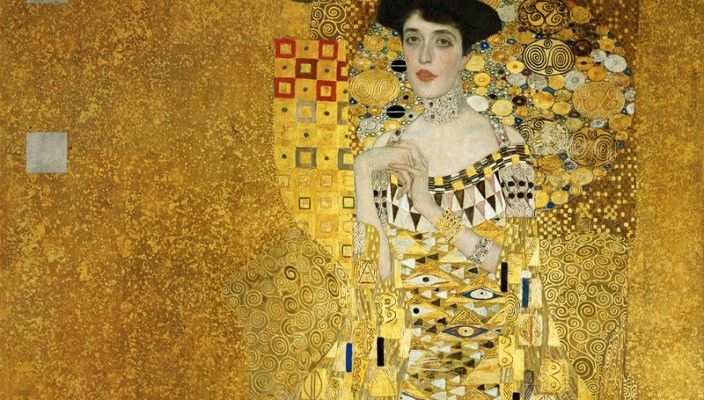 Gustav Klimt,Portrait of Adele Bloch-Bauer I, 1907, Gold, silver, and oil on canvas
Neue Galerie New York. Acquired through the generosity of Ronald S. Lauder, the heirs of the Estates of Ferdinand and Adele Bloch-Bauer, and the Estée Lauder Fund 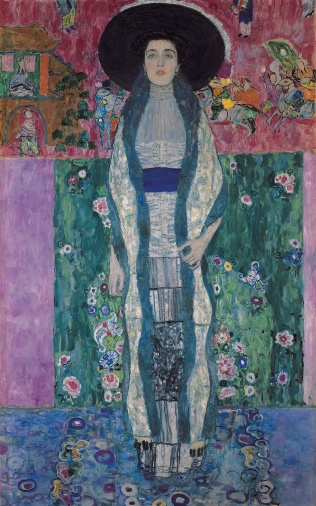 The exhibit on Alexei Jawlensky (1864-1961) is the first museum retrospective in the United States that is completely dedicated to this Russian expressionist. It attempts to provide an overarching and complete vision of the work of an avant-garde artist who participated in a number of expressionistic and abstract movements. The exhibit’s originality is found in the selection of works and their sources. Surprisingly, the museum itself has not one of Jawlensky’s works in its permanent collection—instead it contains about 75 works ranging from 1900 to 1937. The majority of the works in the exhibit were obtained from private collectors, reinforcing the unusual nature of this particular exposition. Renée Price, the museum’s director, described with much amusement that two of the displayed works were added only a few days before the exhibit’s opening. Collectors had found out about the upcoming showcase in an article announcing it before then contacting the institution in and offering to temporarily loan their works—not all of the works were accepted. 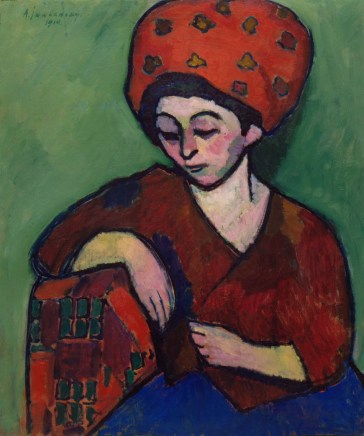 Nevertheless, as a French person—and slightly homesick—I was delighted to see that the exhibit’s official image was the byzantine woman, a unique work originating from France and borrowed from the Centre Pompidou for the occasion.

The exhibit is both thematic and chronological, and is spread throughout four rooms. In the first room, portraits in the style of Vincent Van Gogh and Henri Matisse are arranged. I’m always fascinated by the beauty and the power of the feminine turban, such as that portrayed in “Helene with colored Turban” from 1910. Most of all, I admire the posture of the depicted woman and her turban; the painting reminds me of Matisse’s works because of its colors but also in its treatment of this theme. In reality, the painting is about Alexei Jawlensky’s wife. I also noticed that this painting in particular was the only one to have been signed at the top left…This specific work belongs to the Solomon R. Guggenheim Museum in New York. 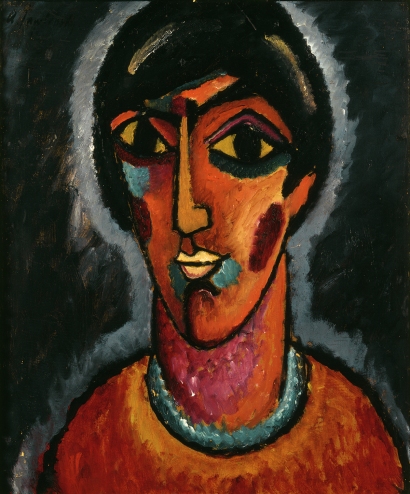 A number of countries are also represented in the exhibit’s first room, which itself is an explosion of colors. Among those that caught my attention was the painting of The young girl with green eyes that clearly reminded me of The young girl with a red knot from the same year (1910) and that had deeply touched me during my visit at the Pinacothèque. 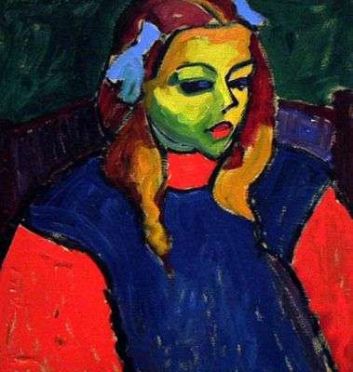 The young girl with green eyes,1910, oil on board, The Art Institute of Chicago, Gift of Mr. and Mrs. Earle Ludgin in memory of John V. McCarthy. 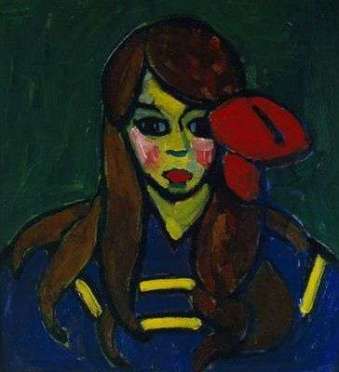 The second gallery is on the history of multiple trips, such as that of Bordighera which doubles as a trip into solitude. Indeed, this period seems to represent a moment of introspection for the artist who at the time was exploring color and material, as is evidenced by the incredibly colorful room—one would assume that colors preoccupied him. 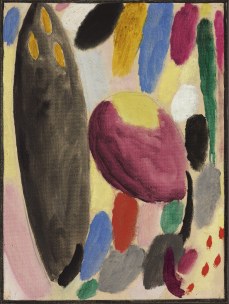 Variations: Chords in Reflection, ca. 1917, Oil on papier mounted on board, Collection of the Long Beach Museum of Art, Long Beach, California The Milton Wichner Collection. 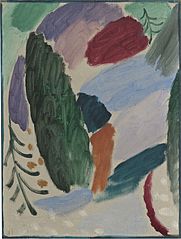 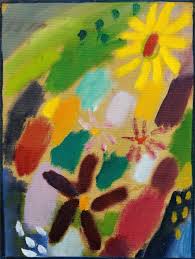 Spring Wind and Meadows, ca. 1916, Oil on board, Courtesy of Oeno Gallery, Collection of Shane and Troy Beggs.

The second to last gallery is dedicated to portraits belonging to Jawlensky. I was taken by the faces consisting of simple shapes, geometric even, though still expressive. The paintings all resemble one another in their differences, to the point where similar paintings would seem, in reality, quite close to their opposites. It’s exquisite. The colors used are touching and harmonious.

Along another wall much more realistic portraits have been hung. They depict women of many civilizations. In them, the viewer can see representations of a woman from Asia, Egypt, a Spanish woman with closed eyes, a Byzantine woman, and a painting in which one woman is portrayed in a doll-like style and another has a green fan. The portraits are extremely expressive and have a way of speaking and even calling out to the viewer, establishing a connection between the visitors and the painted faces. 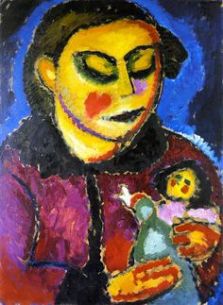 Girl with doll, ca. 1912, Oil on board, Callimanopulos Collection, New-York. 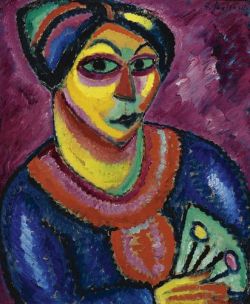 Woman with a Green Fan, 1912, Oil on board, Private Collection, Courtesy Artvera’s Gallery. 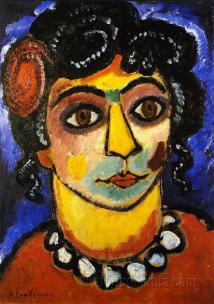 Asian Woman, 1912, Oil on board, The Judy and Michael Steinhardt Collection, New-York.

The last room is just as stunning; small, rectangular, and ochre-colored. Through this last “intimate meeting,” a spiritual dialogue with the artist is created for it provokes a profound understanding of the artist’s work, yet also of him as a person. The evident contemplation behind the smaller drawings, originating from private collections, is accompanied by a melody Jawlensky listened to often. However, the gallery is also troubling in the nature of the works it holds, which were composed during the artists last years and created despite his progressing paralysis.

The faces in these drawings are formed by dark vertical and horizontal lines. For the most part, this particular selection of works is called Meditations and may remind visitors of African masks dedicated to rituals. Furthermore, the more somber palette used gives a mysterious air to the works while also reasserting the chromatic power found in these small portraits.

Above all, this room serves to remind us of the importance and influence of religion in painting. Angelica Jawlensky Bianconi recalled that painting, for her, is a need that allows her to create something “spiritual.” An internal dialogue with God is comprised in the “Meditations” hung in this fourth room, concretely representing her method of communicating with God, the father and creator of infinity. Alexei’s granddaughter has said with pride that no other artist in his time has gone as far as her grandfather in this form of spirituality. 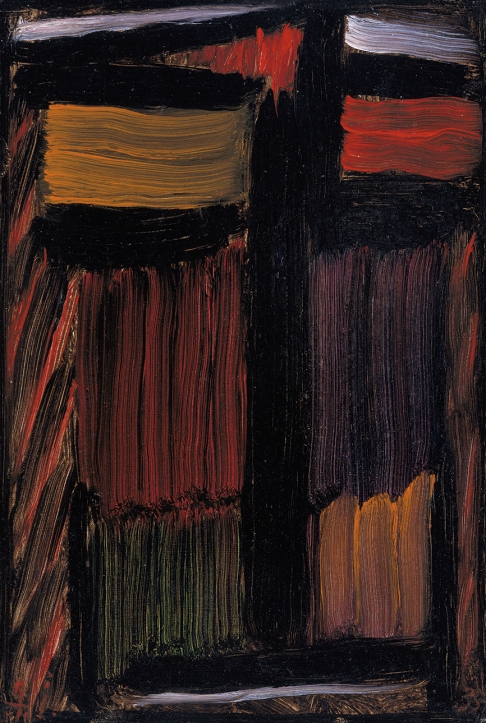 Meditation: My Spirit Will Live On, June 1935, Oil on paper mounted on board, Museum Wiesbaden

This exhibit tells both the story of a life and an artistic movement, for the subject of Russian expressionism is not often broached and is rarely understood. The historical timeline is splendid as it puts Jawlensky’s life in perspective with the different events marking that era.

Contrary to Europe, Jawlensky’s work is not well known in the United States. Nonetheless, it is interesting to note that over 200 of Jawlensky’s paintings belong to (haies sur toiles?) American collections despite the artist not having been at the International Modern Art exposition (Armory Show) in New York in 1913. Arthur Jerome Eddy (1859-1920) was one of numerous Americans to actually collect Jawlensky’s work along with the work of Paul Klee, Franz Marc, and Gabriele Münter. Eddy was also one of the first to acquire one of Kandinsky’s works (after Alfred Stieglitz). The current exhibit has also, in effect, reopened the debate over Jawlensky’s artistic membership—is he a painter in the style of German expressionism? Or is he a Russian artist who simply lived in Switzerland and Germany? 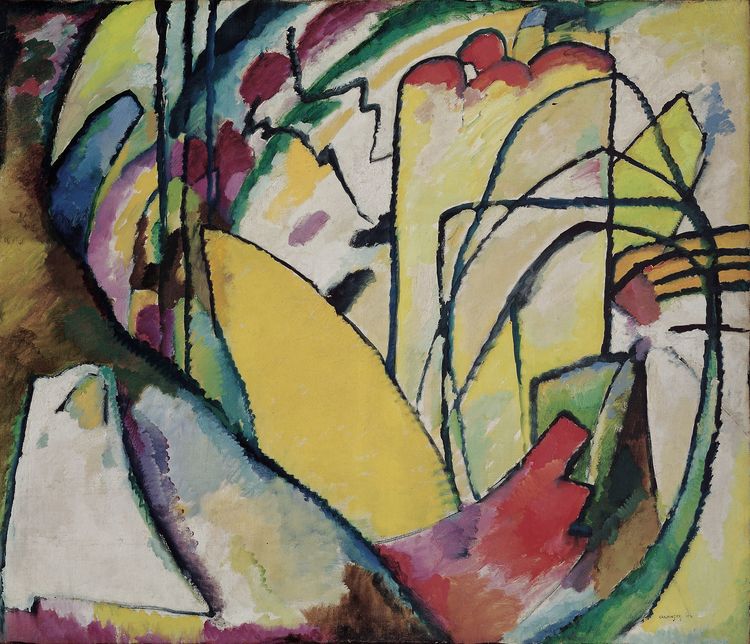 This exhibit was made possible by the admirable visiting curator Vivian Endicott Barnett, an expert on Kandinsky and Jawlensky, as well as by Angelica Jawlensky Bianconi’s participation (Alexei Jawlensky’s granddaughter). Finally, it serves as an homage to the co-founder of the Neue Galerie, Serge Sabarsky, whose favorite artist was also Alexei Jawlensky. 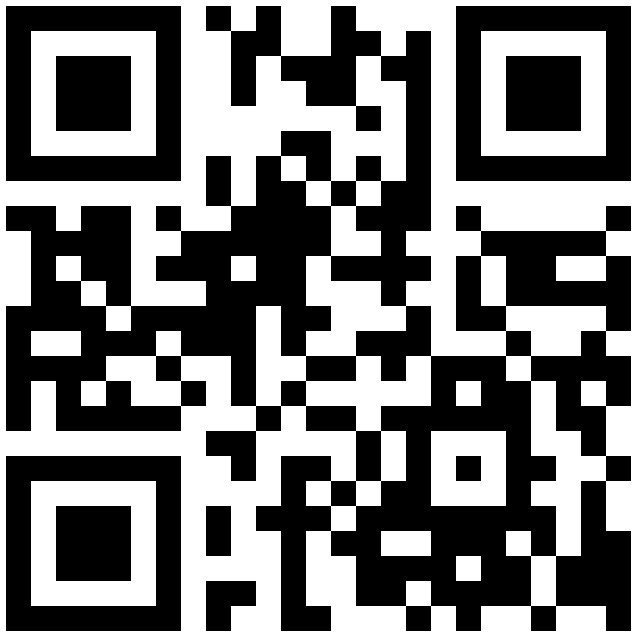